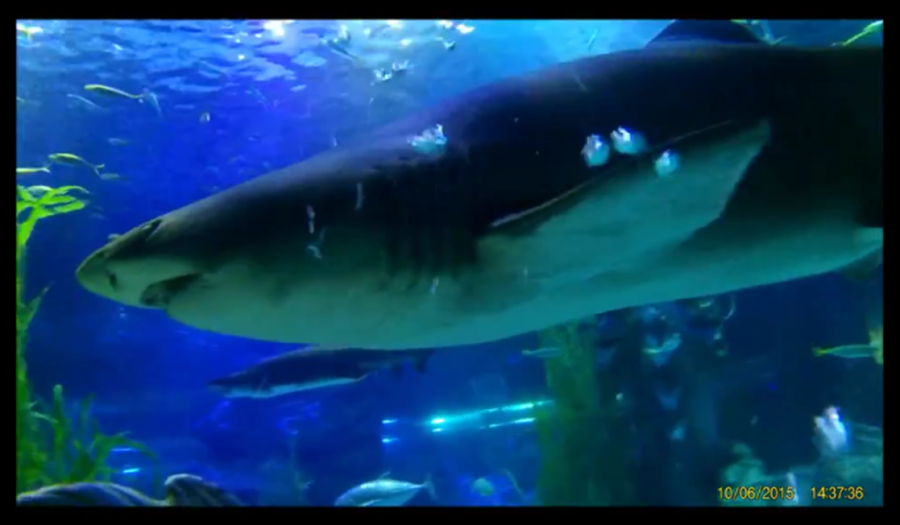 There I was, staring into the cold, dead eyes of the beast. Its mouth was slightly open, revealing rows upon rows of crooked teeth pointing in every direction. Hovering above me and moving as slowly as a blimp, the big fish looked with curiosity at the four strange creatures clad in all-black, with large metal tanks on their backs and masks obscuring their faces. Its gray pupils glancing ever-so-slightly in our direction, it decided it wanted a closer look.

Whoooooooosh. Our diving instructor took his spare regulator out of its pocket and blew a rush of bubbles into the shark’s face, deterring it from approaching us. I could almost see the shark wrinkling its nose as it changed course, its fins nearly brushing against my arm as it swam past me.

Motioning us to come forward, the dive instructor knelt on the ground of the tank and pointed to the sea life around us. My two friends and I watched in awe as the dozen sharks swam around us, a merry-go-round of flashing teeth.

Moby Dick has nothing on the Busan Aquarium.

The Sea Life Aquarium in Busan offers a once-in-a-lifetime scuba diving experience in its shark tank, which features twelve sharks ranging from one to four meters in length, two sea turtles, and large rays with tails as long as my arm span. Brave souls that they are, my friends Zoe and Brittany were just as excited as I was to see these creatures up close.

After touring the aquarium for about two hours and seeing the gigantic tank from the outside, we went to the back rooms of the aquarium to prepare for our dive. Our instructor gave us a rundown of the rules (don’t touch the animals, keep your hands close to your body at all times, don’t drown, etc.), we donned the full-body wet suits, complete with water shoes, gloves, and a head cover. After a quick scuba lesson in a separate, shallow part of the water, the instructor led us one-by-one down the rope descending to the bottom of the shark tank. It was only about four or five meters deep, and the water wasn’t as cold as I expected.

When all four of us reached the bottom, we began our tour. Unlike traditional scuba diving, we were not swimming–we were walking on the sand at the bottom of the tank. Holding onto the equipment of the person in front of us, we walked in a straight line around the tank to see the different fish. It felt more like walking on the moon than diving in the water, and the creatures around and above us seemed like they were flying rather than swimming.

Sharks swam toward us and around us, often so close that I could have touched them (if, of course, I didn’t mind losing a finger or an arm). A large ray glided over my head, skimming the top of my mask as it gracefully landed on the sand. Smaller fish danced around the tank as if they were laughing at the funny-looking humans still trying to find their sea legs.

It was easy to forget that we were in a tank until we passed by the glass wall that separated the animals from the tourists outside. I couldn’t hear anything under the water, but when I looked at the other side, I saw Korean children shouting with excitement and rushing to the front of the tank, waving hello and pointing at the sharks swimming above our heads. Our friend Susan was also there, taking pictures of us from outside.

The dive instructor stopped us in front of the glass wall and reached into the sand. After a few seconds of rummaging around the tiny rocks and pebbles, he picked up a large shark tooth. He motioned for us to spend a few minutes scavenging for shark teeth. We collected several each, and then ascended the rope and reached dry land.

I don’t consider myself an adventurous or outdoorsy person, but shark diving has been on my bucket list for years. I am so happy that I was able to do it in this (relatively safe, as far as sharks go) environment and that I was able to share the experience with friends.

Now, about those whale sharks in the Caribbean…

3 thoughts on “Shark Diving in Busan”