After being a student for so long, it’s strange to finally be the one standing in front of a classroom–and, a few times this week, in front of an auditorium full of students and teachers. After this week, I will never be afraid of public speaking again.

My first day of school was on Monday. My host dad drove Su Bin and me to school in the morning, and Su Bin walked me to the English office. There, I saw Mr. Hong and the rest of my co-teachers – Mr. Chong, a young teacher who is new to the high school; Mrs. Jung, the dean of the English department; Ms. Lee, who teaches the first grade (American tenth grade) classes; Ms. Minji Kim, who teaches second grade (American eleventh grade); Ms. Mina Kim, who teaches second grade; and Ms. Seolin Jeong, a teacher just a little older than me. Although I had my first lesson planned, I spent the first day getting to know my co-teachers and building 정 (Jeong, or “rapport”).

We also had the first school-wide teachers’ meeting that morning, and I was asked to introduce myself. Mr. Hong had warned me in advance that the principal wanted to introduce the new foreign teacher, so I wrote my self-introduction on a slip of paper and brought it with me to the small stage in the auditorium. It sounded something like this (in Korean):

“Hello (formal, with a bow). My name is Janine. I am from New York. I went to Villanova University and studied English and history. Now I am an English teacher and I am learning Korean. It’s nice to meet you. Thank you.”

The teachers were smiling, so I guess I did it right! The rest of the meeting was, of course, in Korean, so Mr. Hong had to translate and tell me the most important information afterward. I’m glad I have so much support!

After the meeting, the principal, who was a former English teacher, invited me to have tea with him. This was his last week at the high school, so I will meet a new principal next week. More on the principal’s farewell ceremony later.

The students spent the whole day peeking into the English office to catch a glimpse of their new foreign teacher. Some of the brave ones came into the office and introduced themselves. One of them said he went to the Fulbright English Program camp at Jungwon and had wanted to meet me while he was there! Throughout the week, I heard excited choruses of, “Hi, Teacher!” and “Hello, how are you?!” I also heard a lot of, “Teacher–pretty!”, which made me feel a little awkward. Something to keep in mind for a lesson later on.

As Fulbright suggested, I also gave small gifts to the principal, vice principal, and my co-teacher Mr. Hong, all of whom expressed surprise and delight. Gift-giving is such an important part of Korean culture and goes a lot way toward building 정.

On Tuesday, I taught my first lesson, which provided a basic overview of class rules and rewards. I am the primary teacher in my own classroom, but I usually have a Korean co-teacher with me to assist with translation, teaching, and discipline. For this first week, I also did a quick presentation about myself, helped the students make name cards so I could learn their names, and played a game in which the students wrote five sentences about themselves on note cards and had to guess which card belonged to which student. This card was probably my favorite: 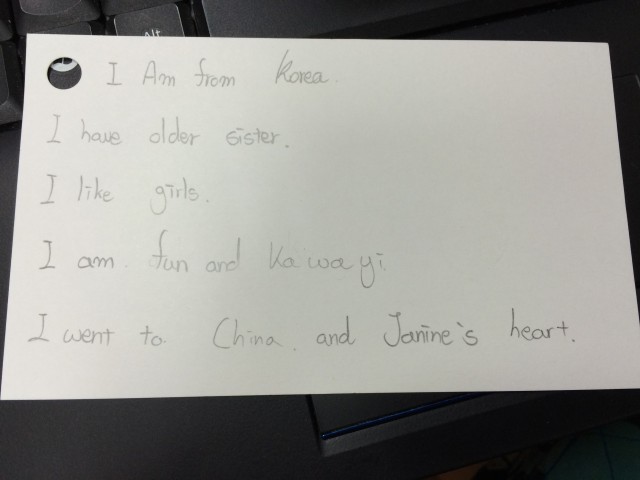 I am also lucky enough to have my own classroom. It is adjacent to the English office and looks like this:

I noticed that most of my students are enthusiastic when they see me outside of the classroom, but in the classroom, their energy level usually depends how tired they are. Starting next week, I will teach most classes out of a textbook and two lessons per week with my own materials. I will have to make it interesting to keep students awake and engaged!

As for my interactions with the other teachers at school, the language barrier is still a problem right now. I hear them asking the English teachers about me, but usually the only words I understand are my name, miguk (“America”) and yeongeo (“English”). I can do the Korean self-introduction pretty well, but beyond that and situations like going to the store, my Korean is too limited to have a conversation. Something to work on over the next few weeks.

Finally, because Friday was the principal’s last day, the school had a big ceremony, complete with speeches from students and teachers, a small concert with traditional Korean music–and for some reason, another introduction of the new English teacher! That’s right, I had to bring my small slip of paper with me to the stage so I could introduce myself in Korean to all the second and third graders, as well as the administration. The students oohed and aahed at my speech, simple as it was, and cheered as I walked on and off the stage. I will definitely have to incorporate the little Korean I know into the classroom so they can see my enthusiasm for their language (and, I hope, have some enthusiasm for mine!).

Overall, I am a little tired from the first week, but I am enjoying life in Korea so far! I can tell that some classes will be a joy to teach; others, perhaps less so. Still, I am adapting to teaching much better than I expected. Let’s see what next week brings!