I’d like to take a break from posting about Korea to post about something else: the Villanova Wildcats won the NCAA Basketball Championship!

I admit, I didn’t care very much about basketball while I was an undergrad. I was laser-focused on my schoolwork, part-time jobs, and extra-curricular activities, so basketball was not a high priority. Toward the end of my senior year, I finally attended my first game in the Pavilion and watched several more games on TV. I generally dislike sports, so I was surprised to learn that I enjoyed watching my college team play.

My mom, however, is the real Nova basketball fan. She has texted me about the games and the players since the 2015-2016 season began. I heard players’ life stories over FaceTime and received live score updates over WhatsApp. I learned more about the Villanova Wildcats from my mother than from four years on campus. (Sorry,  guys. Falvey Memorial Library didn’t broadcast the games!).

For most of the fall and winter games this year, I slipped back into my usual apathy toward basketball. After all, I had so much to do and see in Korea! But since I’ve settled into a new semester and have (somewhat of) an idea of what I’m doing, I decided to follow March Madness again and fill out a bracket with some other Fulbrighters.  Korea is 13 hours ahead of the eastern US, so sometimes I would wake up early on Sunday morning to catch part of the weekend games. And when Nova kept winning, my interest kept growing.

Sweet Sixteen. Elite Eight. Final Four. The words were plastered all over my Facebook feed and my inbox. After defeating Oklahoma and securing a seat in the championship game, the Wildcats became much more of a priority, and I started planning parts of my schedule around the final game.

At this point, I remembered a math teacher I had in high school. Mr. Finta was a Virginia Tech alumnus, and he was obsessed with college sports. Whenever the Hokies won a game, he would stand in the hallway with a radio, blocking the students rushing to class, so he could blast the fight song and wave a VT banner. I thought he was crazy until I was tempted to do the same thing for Villanova.

The day before the big game, I had an after-school club class. The general class topic is “speaking and writing with Janine,” so I couldn’t think of a more “Janine” thing to do at that point than share my enthusiasm and teach a lesson about Villanova! I taught my students about March Madness, showed pictures of Villanova, taught some cheers and played the fight song, and then divided them into two teams to answer English questions and shoot a bouncy ball into a (poorly-made) hoop. I was thrilled when they left class still doing the Villanova chants!

When the championship game started in Houston, it was Tuesday morning in Korea. As soon as my morning class finished, I sat at a desk in my classroom and logged onto Skype from my school computer. My school computer isn’t configured to watch international sports, so I spent an hour and a half videochatting with my parents to watch the second half of the game. I realized that even though I live in a foreign country, I’m not fluent in Korean, and I teach 600 students a week, that last minute of the game was the most stressful part of my time in Korea so far. 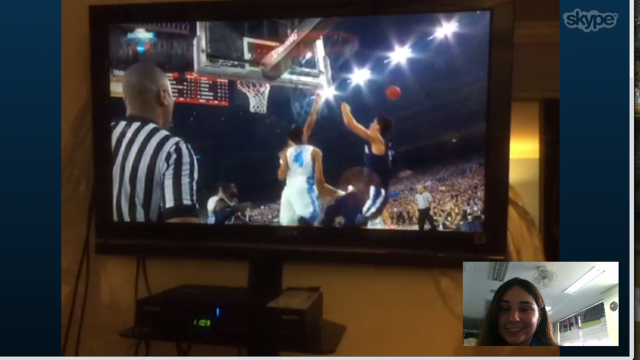 When Kris Jenkins made the final shot, with less than a second to spare, I screamed in the middle of the classroom. And yes, when it ended, I shed tears of joy.

I think they were tears of joy, but the victory was bittersweet for me. Missing my college friends and life on campus has been the hardest part of living in South Korea. Watching the final game today brought so many of those feelings back–the good and the bad. I’m ecstatic that the Wildcats won the championship for the first time in more than thirty years. I’m furious that the Wildcats won the year after I graduated from Villanova. I’m frustrated that I’m too far away to cheer with friends or watch the game in Connelly or the Pavilion. But I’m strangely glad that I can still celebrate virtually with my family, friends, and the students and professors who are still on campus.

Today was a reminder that I’m not a student anymore, even though I often feel like one. But it was also a reminder that I’m still a Villanovan. Villanova students and alumni pride themselves on being part of a “community,” and this was the first time I experienced what it meant to be part of a community even when I am not physically present. It’s even more strange to me that I am experiencing this sense of community over basketball, which was never an important part of my Villanova years. Most of all, my distance from everything I knew before has shown me that I am still part of the many communities that have formed me–Villanova, America, New York, and now, Fulbright. These communities will always be part of me wherever I go and can manifest themselves in the most unexpected of ways.