Today was the last day of school. It’s strange to think that this weekend, I will be at the airport on my way home to New York. In its own way, the past week has been difficult because I have had to say goodbye to students, co-workers, and friends I have grown close to during my grant year. Here are a few pictures and stories from the last few days at Gimhae Jeil High School:

Before playing a movie during the last week of classes, I gave a brief farewell speech to each class and thanked the students for their hard work this year. I also gave them my contact information so that we could stay in touch when I return to the US. During this week, some individual students gave me notes or candy as a goodbye present, while other classes gave me a large piece of paper with goodbye messages and drawings.

After school, several students messaged me on KakaoTalk or Facebook, asking me not to forget them or begging me not to go home. I felt so bad that they were disappointed, but I told them that I’m sure they will have a wonderful time with the new Fulbright teacher.  I hope I can stay in touch with some of the students after I leave.

The English teachers threw a small “farewell party” for me, complete with coffee and cake. They gave me a lovely parting gift (a traditional knotted necklace and a pair of earrings made of inlaid seashells) and took pictures with me. The teacher sitting next to me in the picture below is my Fulbright co-teacher, Lee Moon Jin.

Jeong Won, the president of the students’ English conversation club PMP (Practice Makes Perfect), came to the teachers’ office in the morning and asked me if I could do a final meeting with them during lunchtime. I agreed to meet them at 1:10. Right before lunch, another student from PMP asked me to come at 1:15 instead. Hmmm….

I went to the classroom and saw that the lights were off. As I opened the door, the students were standing around the teacher’s desk and applauding. They were throwing me a farewell party, too! The students gave me a beautiful card with a cake. They took turns reading their individual messages to me–from “I will never forget you,” to “I learned a lot from you,” to “I don’t think you know who I am, but I love you anyway” (ouch). I wasn’t quite ready to start crying, but I was pretty close. 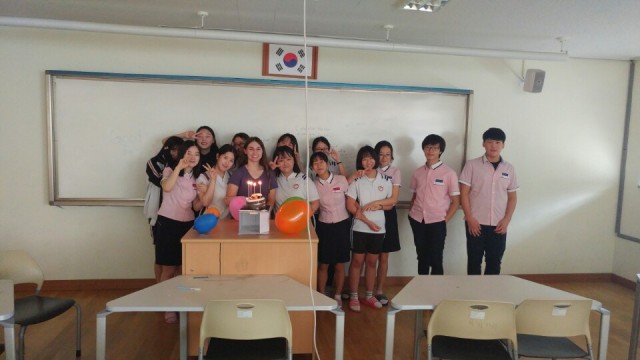 After school that day, I went to a jjimjilbang (Korean sauna) and Korean barbecue with a few of my co-workers, including my co-teachers from this semester and last semester. It was nice to spend some time together outside of school, and I think they appreciated the opportunity to know me as a person and not just as a teacher.

Boryeong Mud Fest with some of my closest Fulbright friends. Many of my friends are staying in Korea for another year, so it will be a while before we see each other again. Fortunately, most of us live in the northeast, so we can still visit each other in the future.

I gave a short farewell speech to the Korean teachers during our teachers’ assembly. Throughout the rest of the week, the non-English teachers seemed a little friendlier than usual or tried to engage in conversation about my trip home. I think I will miss them, too–even if most of our interactions were just “good morning” and “goodbye.”

The annual choral festival, during which each class sings a song together either in English or Korean. I baked cookies for the gyomushil as a general goodbye present and gave thank you cards to the teachers in the English department. At this point, I was starting to think that it was taking an awfully long time to say goodbye.

The last day of school.

My co-teacher asked me to prepare some farewell comments for the students’ assembly. Though I needed her help with translating a few phrases, I decided to deliver my comments in Korean because I thought the students would appreciate it more. I also thought that if I spoke in Korean, I would be distracted by my focus on the pronunciation and delivery and wouldn’t get too emotional.

At the assembly, my Open Window winners received their awards, and I went up to the stage to deliver my speech. Behind me, there was a slideshow with pictures from my classes (Not posting here–they’re not very flattering!). I started my speech by saying that I was going to New York on Saturday, and I heard a collective groan from the students. I felt my throat tighten as I focused on the Korean for “I will miss you,”  “I will remember this school forever,” and “I love you guys!”  No tears, much to my relief, but still a sense of sadness that I will not see the students again.

All of the teachers went to lunch together after the ceremony, and I bade everyone goodbye for the last time. It hasn’t sunk in yet that I’m not going back to school, but I think it will be much more real when I get on the plane.

Saying goodbye was much harder than saying hello. At the beginning, the students were curious and excited to meet the new foreigner. At the end, they were sad to see me go. I don’t think they will forget me entirely, but I know they will also be caught up in the excitement of meeting a new English teacher in August. Sad as it is to leave, I’m sure they’ll be in good hands

Though I doubted it at times, I think I had a positive impact on my students. For some students and teachers in particular, I know I made a difference just by listening to them and being a friend. I hope their memories of me will be as fond as my memories of them.